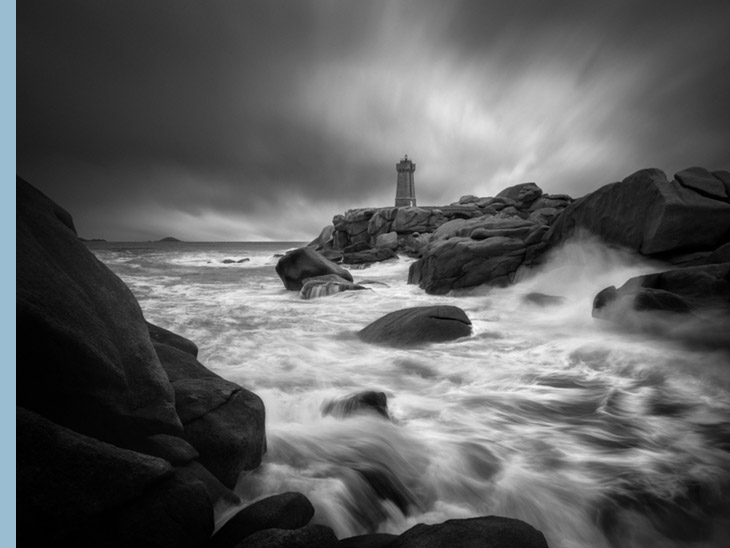 THE MAGIC OF LONG EXPOSURE

French self-taught fine-art photographer Arnaud Bathiard (1973) specializes in black and white sea and waterscapes, incredibly calming still waters. Passionate about traveling, he has a predilection for austere landscapes he often treats in a minimalist vein. As a late bloomer he started capturing serene images in a serious way and quickly specialized in the technique of long exposure. He still uses film to take photos. Composing an imaginary space beyond physical geography, his pictures draw a sleek, streamlined world frozen in silence and eternity. Famous images in which time seems to have stopped for a crystal-clear moment. At first glance, it may seem easy to photograph the scenery of water and nature, but it takes patience, effort and, above all, the good eye of the photographer, which the author of the images, Arnaud Bathiard, certainly has.

Somehow, over the years, I've become fascinated with lighthouses. I have often stood at the end of the world and usually such a place is accompanied by a lighthouse. A lighthouse is a tower topped with a very bright light called a beacon. The beacon is used by sailors to help guide their ship at night. Lighthouses come in all shapes and sizes. They are usually located on the coast, on islands, or in the middle of busy harbors. They mark dangerous coastlines, hazardous shoals, reefs and rocks.

I occasionally check Instagram or Behance looking for images of lighthouses and so I recently came across some photos of Arnaud Bathiard. I was immediately captured by his beautiful work. 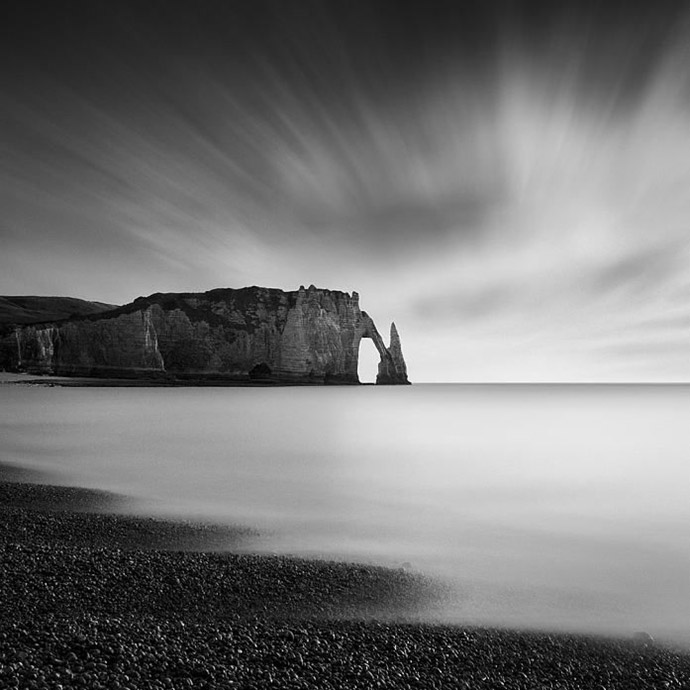 Arnaud Bathiard calls himself a hobbyist with fine-art photography as his forte. The former lecturer in the history and philosophy of medicine — nowadays he supports and coaches people which are very far from employment where he uses photography as a tool to work on self-esteem — likes to be alone in the middle of nowhere, the sea and the rain raging around him. He especially likes the wait, the minutes that pass while his camera records a scene, and the surprise renewed each time when he looks at the image made — sometimes farther from what he had in mind, sometimes close, but always amazing because of the magic of long exposure.

Because he discerns with difficulty the nuances between some colors, Bathiard converts his images immediately to black and white. One can say he's partial color blind, but he perceives a lot of nuances in black and white, especially in medium tones, which allow him to play with a range of tones quite wide. Black and white is just obvious and quite natural. It's a curse for everyday life, but a blessing for photography, he confides in me. Hence, he edits very few color photos because it feels like a real torture for him. His world is simply in black and white. However, during the last years, he ended up developing techniques that allow him to work mainly with muted colors. His wife Tiphaine is a great help during that process: “her criticism allows me to avoid disasters in terms of colorimetry.” Paradoxically, his color photos also work quite well. Bathiard recently signed a contract with the Yellowkorner brand to market some of his images in their thirty galleries around the world. And the images in question are all… in color! 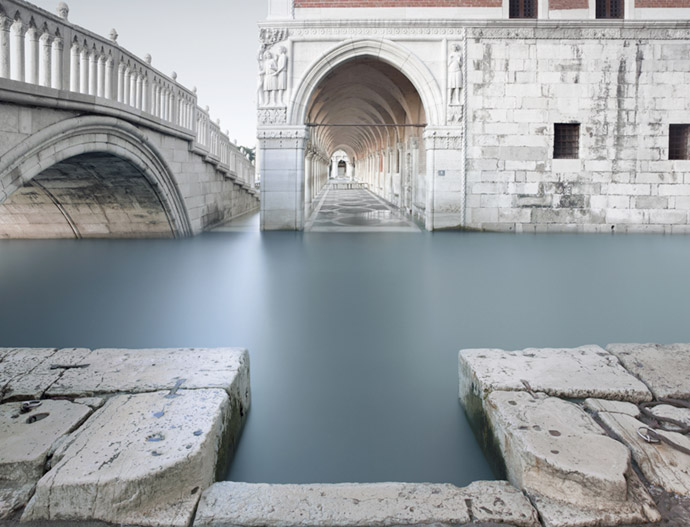 The Frenchman uses different film cameras (a Holga 120 N, a Bronica S2 from 1962 and a Pearl River Twin-Lens Reflex from 1972). He recently acquired a Zero Image Pinhole, whose design is adapted by the manufacturer to perfectly meet his needs, but unfortunately he hasn't yet had the time and the opportunity to test it — mainly due to lockdown. Bathiard particularly likes the grain of vintage films, with a predilection for Ilford (Delta 100 and HP5) films. For long exposures, he uses Fuji Acros 100 films, which have excellent reciprocity.

Bathiard mainly uses his Holga and his Twin-Lens Reflex for portraiture. The Bronica S2 serves him mainly for long exposures. But he's also started to take long exposures with the Holga recently: he uses a wooden clothespin as a trigger — “rather handcrafted, but it works!”, he sent me by e-mail.

He doesn't develop his films himself. He entrusts them to a professional laboratory with which he works for his prints and exhibitions. The negatives are scanned and then Bathiard works on the images in Photoshop. He admits that he isn't totally satisfied with this process: eventually, he would like to be able to develop his own films and make the prints himself. At the moment, because of lack of time and space, he opted for this solution.

Arnaud Bathiard is also very attentive to weather and light conditions. These are determining factors in his choice to take a picture. It can happen that he waits several hours in the same place to get the conditions he wants: light, mist, clouds, rain, etc. In general, he takes several trial photos to find the right angle and the right composition. Conversely, sometimes he has to take a picture very quickly when the light conditions or the weather are changing drastically.

"Long exposure photography taught me patience – and you need a lot of patience when you have to wait, sometimes for many long minutes, balancing yourself while perched on a rock. Now patience and equilibrium are my favorite things in life too." — Arnaud Bathiard

Long exposure refers to a technique where you keep the shutter open for an unusually long period of time. So instead of capturing an image in a split second, you trigger the shutter button and wait — often for minutes or even hours — until the exposure is finished. The easiest time to do long exposure photography is any moment when light is limited.

The most important step in creating a gorgeous long exposure image is choosing a landscape that is conducive to this kind of landscape photography. Long exposures are ideal for conveying movement, so whatever landscape you choose, ensure that there is something in the scene that will indicate the passage of time — a river, a waterfall, waves crashing on the beach, or passing clouds come immediately to mind as ideal subjects.

Clear blue skies can often symbolize peace and calm, while cloudy skies can evoke feelings of uncertainty and unrest. Arnaud Bathiard set out to capture landscape images before, during, and after rain storms to see what emotions and feelings his images would make people feel. A light rain softens the landscape, the mist will fade the objects and the horizon line. With long exposures, Bathiard is able to capture both the calm, peaceful nature of a simple rain shower, and also the violent side of a storm too. It’s really quite amazing how weather events can add so much to an image, and how different they can make the viewer feel. Before the rain starts, the images give off the feeling of peace and serenity, with whispy clouds floating above the land below, while the images captured during the storms can make the viewer feel a sense of chaos and restlessness as waves crash against the rocks and stir up the seas.

The black and white tones of the images are perfect for the subject matter too. The gorgeous light clouds and waves contrast perfectly with the dark tones of the landscapes which give the seemingly simple pictures so many layers of depth that just add to the overall feel and ambiance of the images. Water and air mix to create a very special atmosphere with powerful graphic lines.

Bathiard also looks for the most minimalist composition in every picture he makes. The pictures are taken in different places at different times, but they still retain the same and beautiful appearance. Beautiful, clean images depict a frozen and quiet world in a minimalist style.

"I have always loved those autumn and winter days at Annecy Lake, when the fog seems to last forever, covering everything with its coat. Sometimes a brief interval of light reveals the mountains, the landscape finally seems to come alive, before falling back into a silence that is interrupted only by the cry of the birds. I like to arrive there very early in the morning, before dawn, to prepare my equipment and choose the best angle of view, smoking a cigarette in the biting cold, waiting for the first light. Nothing can replace these moments of princely peace where, for a time, I am in harmony with everything that surrounds me." — Arnaud Bathiard 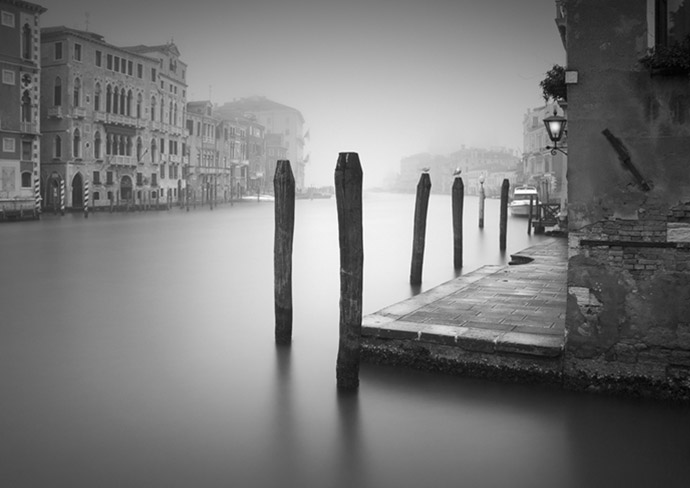 Usually full of colorful tourists, the seaside city takes on a whole new vibe under the gaze and long poses of Arnaud Bathiard. While it is easy to bring beautiful pictures of Venice back home, it is difficult to stand out. The Frenchman fell deeply and madly in love with the city of Venice, but his Venice is very far from the usual clichés spread on the city: it is a ghost city, shrouded by mist and silence, frozen in an eternal winter, where people no longer seem to have their place. He especially loves this season in Venice, when the fog makes buildings and bridges quite disappear. Early in the morning, the streets are almost empty of any human presence. The city then becomes, for a time, and very selfishly, his kingdom.

AZORES | An archipelago scattered in the mid-Atlantic

The mystical Azores, an autonomous region of Portugal, are most commonly characterized by spectacular and dramatic landscapes, fishing villages and green pastures that have been gratefully saved from mass tourism. Bathiard does a spectacular job of capturing the unique landscape of this secret land with incredible softness and clarity that celebrates its natural beauty. The long exposure technique adds an incredible sense of peace and tranquility that one can only imagine as the feeling of stepping onto this majestic land.

Many photos over the past five years have been taken in his favorite region of France, Brittany, and more specifically in North Finistère — Finis Terrae in Latin, the end of the land. Finistère remains a preserved region, a land of rocks, wind and rain. Bathiard spent part of his childhood there.

In recent years, Bathiard has had the opportunity to return to the places of his childhood for short stays, mainly during high tides and winter storms. Most of the photos that follow were taken on this occasion, in sometimes difficult circumstances. The header photo of this story — Solstice, Brittany, France, 2016 — was taken on a freezing December morning during a raging storm and left him soaked to the bones.

The Silence of the sea was taken in Saint Malo, in Ille-et-Vilaine, on a foggy morning in March, during the highest tide of the year. High granite walls surround the town, which was once a stronghold for privateers. During the tides, the waves rise vertically above the ramparts and can reach 10 to 15 meters in height. You can easily find images of these giant waves on Youtube. The spectacle is both frightening and fascinating. The Silence of the sea was precisely taken during one of these tides. It’s a long exposure of 12 minutes. The result is this sea as smooth as a mirror, from which breakwaters emerge, like a row of sentries.

While most of these images offer the spectacle of winter storms, with their dramatic skies, some have been imagined in the style of visual haïkus: the emphasis is on negative spaces, and they convey a feeling of rest and serenity.

Now fill your backpack with your camera and filters and go to practice in the field and ... Stay amazed! 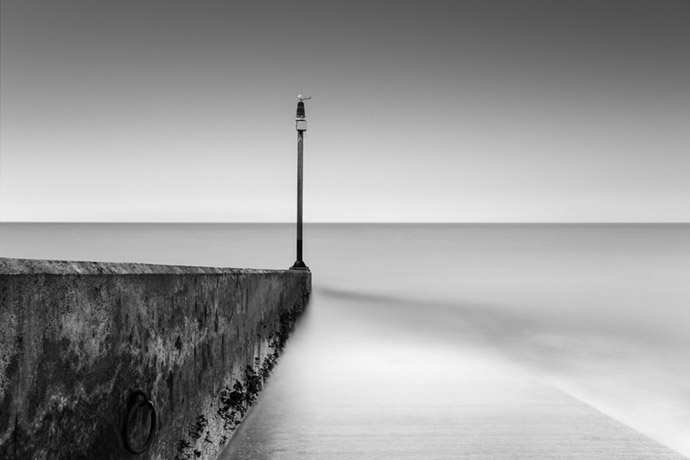 All images courtesy of the artist. Photos © Arnaud Bathiard.