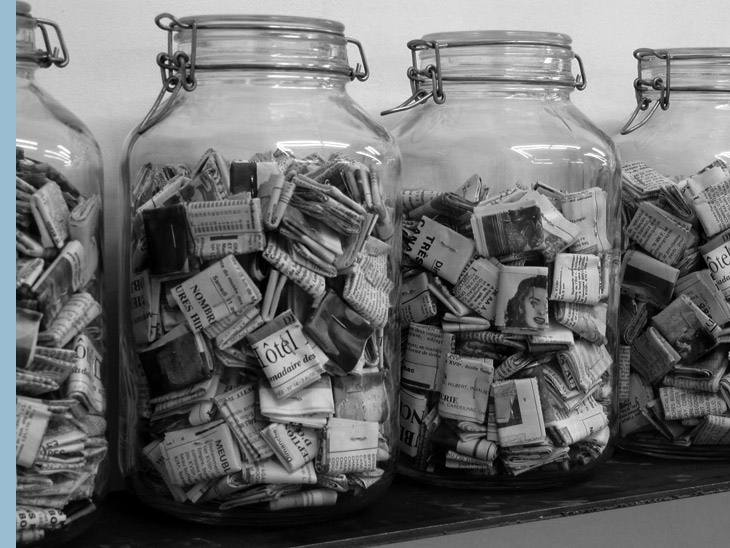 The Belgian artist Denmark — Marc Robbroeckx — (1951, Belgium) uses the printed products of the information age, including daily papers, leisure, job, beauty and lifestyle magazines, and the mountains of books we produce, as materials for his art. He has rendered this overwhelming flood of information and sensory stimulation into unintelligible matter since 1972. His works symbolize the consequences of our waste-producing culture by suggesting a way to deal with the ceaseless flood of information. In making print products into art he combines traditional forms of conservation, such as storage in preserve jars, bottles and sealed plastic bags, compacting and freezing, with forms of disposal including pulverization, cutting and burning.

I don't quite remember how I came across the artistic work of Denmark? I guess it must have something to do with the materials he uses a lot, wood and paper. His assemblages of folded newspaper sheets and iron wire and his monumental visual archives can certainly charm me.

After his studies, Marc Robbroeckx is struck by the many books that have piled up along the walls of his room. However, they do not bring him the expected peace and knowledge. He decides to tackle what he calls a crisis of representation: on the one hand, the flow of information, while excessive, does not provide him with satisfactory access to reality, on the other hand, the development of his own thinking does not follow the rate of information multiplication. Faced with the uncontrollable abundance, he turns around and becomes an “artist-archivist”.

Denmark is tired of being overwhelmed and believes that “what doesn't know, what doesn't hurt”. Taking the word 'press' literally, he takes on the task of reducing the exuberant volume of publications: given the massive production of 'wasted' paper, it comes down to cutting, shredding, pulverizing. After destruction, Denmark reconstructs. Since the 1970s, he methodically transforms those publications into objects. Meticulously like a taxonomist, he strips the 'useless' writings and, by ritually repeating the same actions (gluing, pressing, binding, etc.), confronts industrial production with his artisanal work. 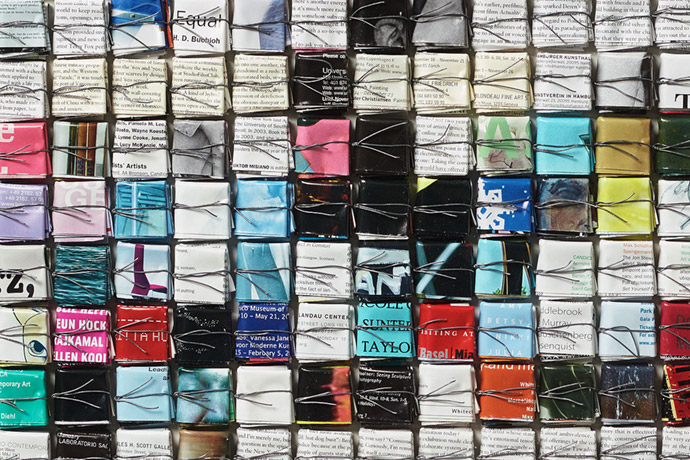 The work of Denmark may first appear as a return to the traditional forms of artistic expression; with paper supporting text and image, Denmark places himself in the lineage of his Dada predecessors. However, in 1986, Denmark turned to the printed word and image of the magazine to create a sophisticated commentary on his society. Sophisticated indeed, for in the new visual arrangement of his text-and-image composition, Denmark raises a myriad of questions on the nature of this association, on its usage for the ‘advancements’ of society and its future existence upon entering the new millennium.

Time magazine is one of the best illustrations of Denmark’s careful manipulations of the written and the visual. This work presents 52 groups of individually wrapped pages from America’s most widely read weekly news magazine. By randomly arranging these ‘packets’ into neat boxes of varying size, Denmark discards the original function of this ’material’ — to inform for a week of society’s own recent history — in order to give these pages the license to live as a work of art — indeterminately. In other words, Denmark redefines in his own terms the association of word and image, of meaning and seeing, and, ultimately, of the signifier and the significant.

I keep asking myself where the name 'Denmark' came from. Could it be, because his first name is Marc, people use to say "Den Marc"?