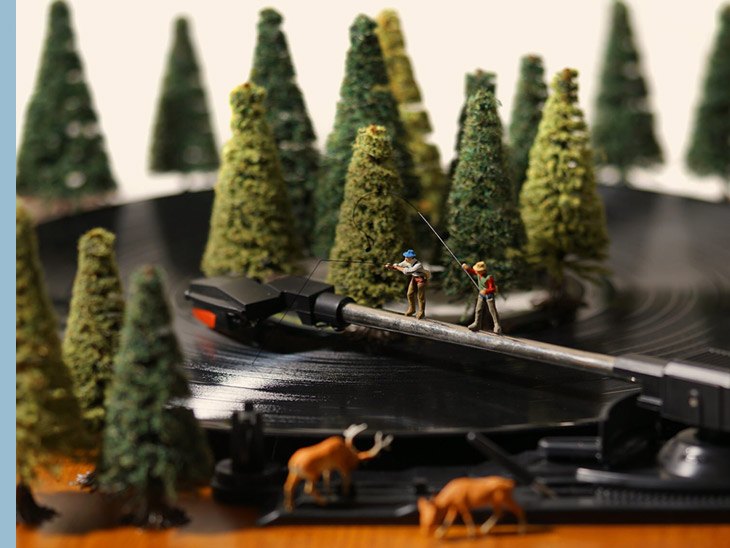 A new generation Japanese artist, author and photographer, Tatsuya Tanaka (1981), has built almost uncountable worlds, turning everyday objects into miniature scenes, such as bed sheets as wavy waters, staples as hurdles, and broccoli as trees. He has a fantastic and fascinating way of looking at our lives and the every day objects in our homes around us. What began as a fun endeavour has taken the world by storm, causing him to create dioramas of daily life in miniature and take photographs of his works — sharing one each day to encourage us to consider everyday life from a miniature point of view. In all, the artist’s numerous charming creations, made every day since 2011, is the foundation of his ongoing miniature calender. His work has made him an internet sensation and has earned him more than a million social media followers. Take a look through the lens of his creative eye.

Tatsuya Tanaka's Miniature Calender became very popular among internet users, being widely talked about online, as well as in other media. Some may not know him (yet!) but he is very popular and is followed by over a million followers on Instagram! I therefore invite you to discover his unique work through a short report. Immerse yourself in the small world of this special creator.

In a previous life, Tatsuya Tanaka was an art director in an advertising agency where he planned and developed advertisements. He also had his own Instagram account and was looking for some inspiration. He started with a small collection of his own males, animals, etc., which he put down in a recognizable composition. He soon noticed that his miniature compositions were popular. He received many responses and the images were eagerly shared. His fan base is growing all over the world. He currently has more than 10,000 dolls and over 2.6 million followers on instagram. 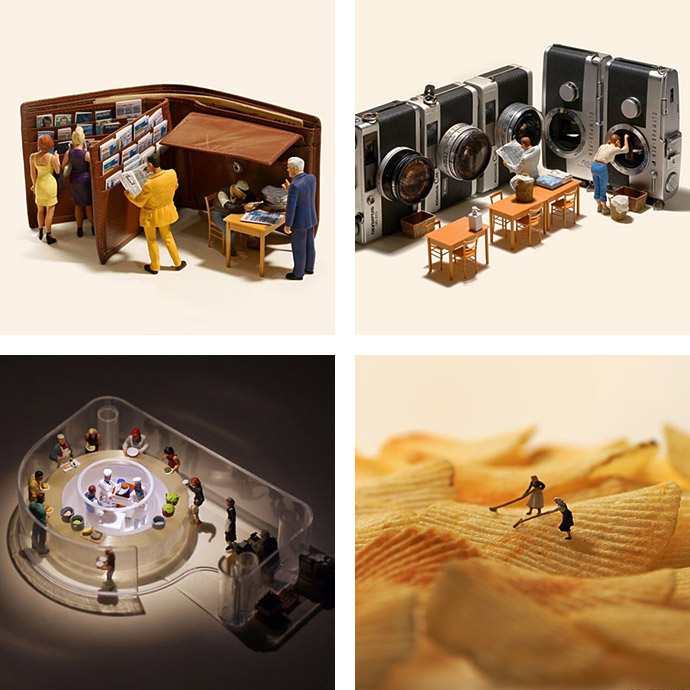 You can’t help but smile at miniature people interacting with the real human world. Tatsuya Tanaka is so creative and comes up with delightful scenarios that will certainly put a grin on your face. The aptly titled project, Miniature Calender, combines photography, art direction, a continually growing collection of miniatures, and every day objects repurposed and reimagined into something entirely different yet instantly recognizable. Our tiny lives through the eyes of an artist. The models intricately depict people going about of life at work, home and at play — all constructed using every day objects like food, office supplies and the odd leaf or takeaway container. Tatsuya Tanaka shows us the beauty in little things. By combining common objects with an immense library of tiny plastic figurines, Tatsuya uplifts and stuns his audiences with everyday, relatable scenes depicted from a small perspective. From a tiny Roman Colosseum scene in a tart shell to a transporting beach tableau using a prosciutto sandwich and egg sun, a smartphone as a swimming pool, a remote control instead of a building, a broccoli to represent a giant tree, a toothpick as an alter ... Nicely framed, focus on the strong point, lighting okay.

The word diorama originated in 1823 as a type of picture-viewing device, from the French in 1822. The word literally means "through that which is seen". The diorama was invented by Louis Daguerre and Charles Marie Bouton, first exhibited in Paris in July 1822 The meaning small-scale replica of a scene is from 1902. The current, popular understanding of the term denotes a partially three-dimensional, full-size replica or scale model of a landscape typically showing historical events, nature scenes or cityscapes, for purposes of education or entertainment. 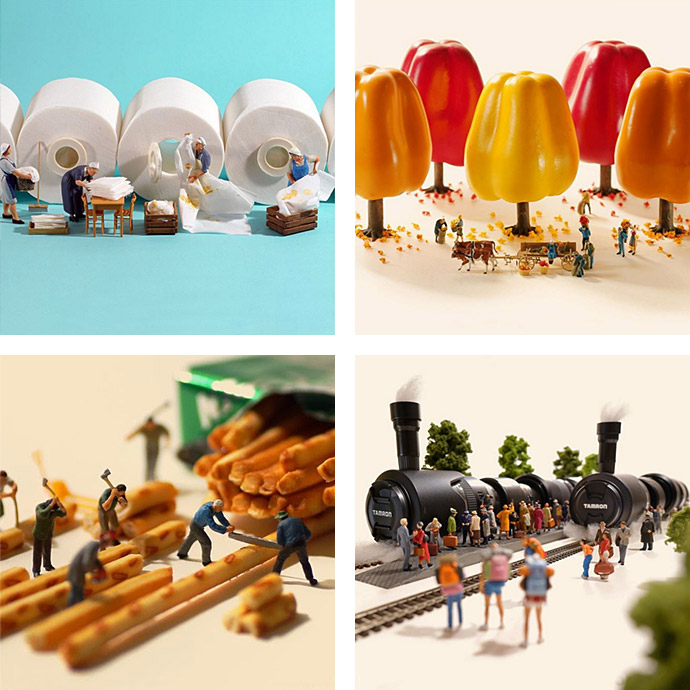 "These photographs primarily depict diorama-style figures surrounded by daily necessities. Recognizable, everyday objects become the set pieces and tools for my tiny figurines. I make a conscious effort to make my works simple enough that even grade schoolers worldwide can understand them." — Tatsuya Tanaka

Tanaka’s inspiration shows no signs of slowing down. And this is precisely where the magic and geniality of his creations resides. While we immediately recognize these simply objects, our imagination transport us to an alternative reality in which their identity is completely transformed. 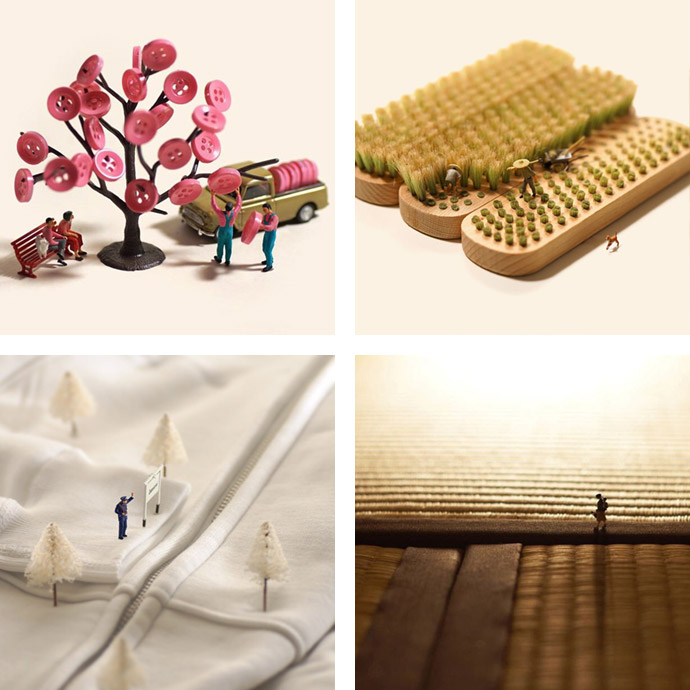 "I have a special attachment to the broccoli work ‘picnic’ which is on the cover of my photo book; and ‘way home’ which I have likened tatami mats to rice fields. When I was a child I would compare broccoli to trees and in these scenes I would play with my superhero doll who would be fighting a monster in this forest. I also imagined the edge of a tatami mat as a footpath between rice fields, and I would play with miniature cars in this way. I think this childhood imagination and experience can be strongly linked to the Miniature Calendars. Broccoli and tatami were my initial symbols of likening." — Tatsuya Tanaka 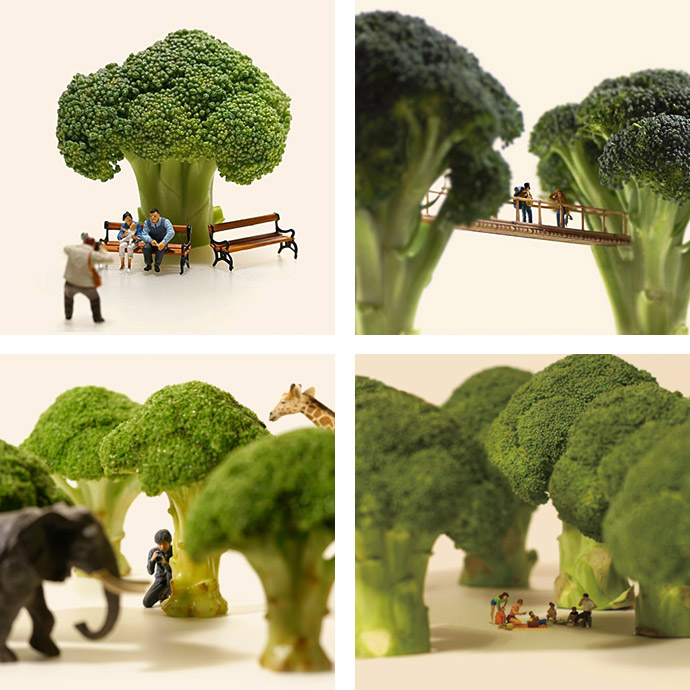 Look who is there among the broccoli in the picture above on the left; Tatsuya Tanaka himself as a wildlife photographer. His creativity is limitless when it comes to It is about diverting everyday objects to make ultra-realistic settings in which to integrate his miniature characters. Tanaka makes clever use of current events. He drew inspiration from the pandemic to release a new series of photographs dedicated to the protective mask. Considering the pandemic we go through and the importance that the protective mask has now taken on in our lives, it is not surprising to discover this new series of photographs around the protective mask. Once again, the artist hijacks the object in a creative and original way. The mask accompanied by palm trees now becomes a rough ocean with big waves. In the other photos, you find it transformed into a beach volleyball net or even a camping tent pitched in the middle of the forest. A folded disposable mask serves as a small tent, toilet paper descends from a wall holder as a snowy ski hill, and a thermometer outfitted with wheels transforms into a speedy racecar. We see a staging of what our summer looks like with the restrictions related to covid. Corona as inspiration.

Tanaka wants to travel the world in the future once the pandemic is over. His miniatures have been installed in Japan, Hong Kong, Taiwan and other places in Asia. He dreams of coming to Europe and America too. When the time comes I will definitely take a look because I cannot get enough of his tiny world. 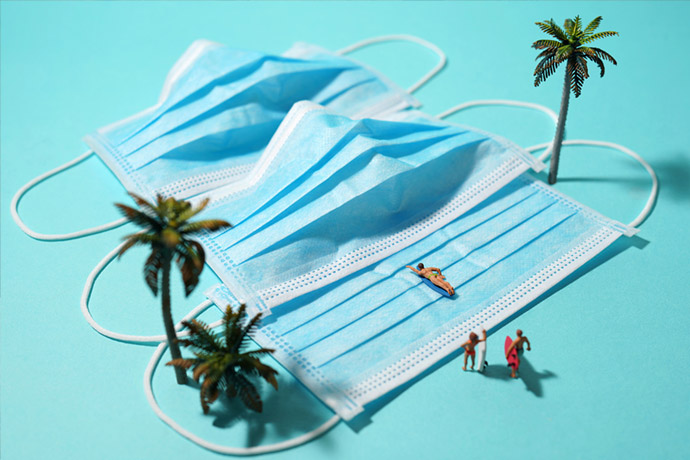 On his Instagram page, Tatsuya Tanaka regularly shares making-of videos of his shootings. It marks the time it takes to set up a scenery and take the perfect photograph. The videos also show that he uses pliers to manipulate miniature objects, all a job of precision! Tanaka has not only continued with the daily ritual, creating over 2,000 scenes in the process, but he has continued to evolve and elevate his craft, finding new ways to see the world around him and stay creative. 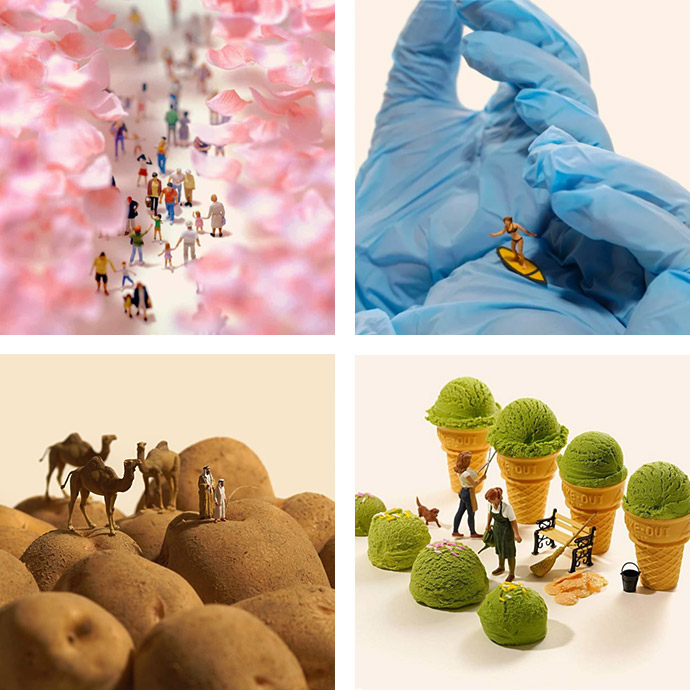 All images courtesy of the artist. All images featured © Tatsuya Tanaka